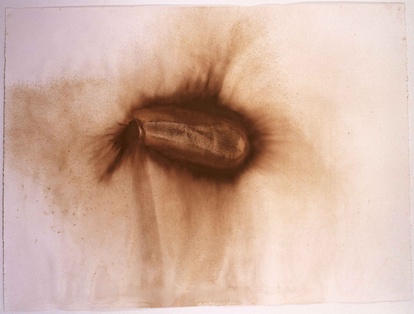 The Monsoon collection is particularly rich in works on paper, from the medium specific collages of Beatriz Milhazes to the residual traces of Ernesto Neto’s biomorphic sculptures thrown onto paper. In addition to addressing the practicality of exhibiting art in a busy corporate environment, works on paper also enables to further broaden the understanding of artists included in the collection and the role of primary drawings as a tool for artist’s development towards large-scale executions.

The scale of the architectural projects by Cuban collective Los Carpinteros would have proven too ambitions for the limited space of the Harrow Road office. However, their status as one of the most important groups of artists that has emerged from Cuba since the 1990s, sharing the concerns and investigations into the nature of collaboration and traditional artisan culture of Alighiero Boetti and Gabriel Kuri, situates them as a crucial focal point for the collection. As a collective, their practice renounces the notion of individual authorship by referring back to the near-obsolete artisan guild tradition. Watercolours such as Pencils & Paper function as conceptual studies, illustrating their manipulation of the languages of architecture and design in their large-scale installations.

Conversely, Argentinean artist Guillermo Kuitca produces his fractured maps as both paintings and works on paper with the intention of engaging the two media in a dialogue. By destroying geographical order in Zurich, Kuitca draws attention to the relationship between place and identity. Having rarely visited the areas he represents, Kuitca transforms the function of the map from that of a practical devise into an imaginary, psychological space, in much the same way as Boetti’s Mappa del Mundo reflects the ideas of the Afghan weavers who made them.

In works such as Untitled, 2002, Cuban artist Tania Bruguera employs the formal leitmotif of the teabag as a metaphor for the co-opting and re-packaging of cultural traditions and products. Works based on the by-products or traces of performative acts are in strong evidence in the collection; a good example can be found in the work of Mexican artist Gabriel Orozco. In his series of ‘frottages’ that include Havre Caumartin, Orozco celebrates the discarded and mundane in contemporary life by making rubbings on the floor of the Paris Metro, creating monumental compositions that record the passage of commuters and the flow of time.

Finally, the importance of the poetic and the metaphysical is reiterated in the collection by the grand gestural works of José Damasceno. Best known for his sculptural installations that play with perceptions of space, his simple, humorous ink and letraset drawings on graph paper produce a strangely vertiginous effect that transforms the flat page into a three-dimensional space. Using many of the same devices found in these installations, Damasceno redefines the spatial conventions of two-dimensional work to create a psychic space upon which to map-thoughts.