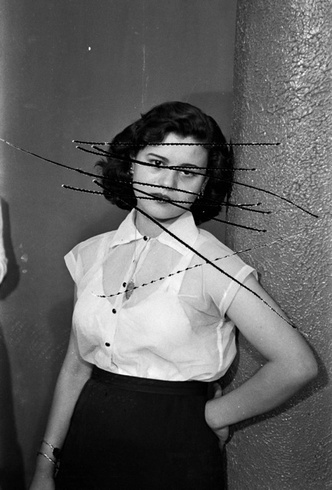 Sometimes, the freedom of the studio could be dangerous.Take the photograph below of Baqari’s wife (we do not know her name; he himself was a member of a prominent family in Madani’s part of Sidon). She must have snuck into Madani’s studio when her husband was away. According to Madani’s account, her husband, a jealous man, didn’t let her out of the house alone; he couldn’t stand for other people to look at her. She had two portraits taken. The first was a Bedouin fantasia: she wears a black abaya and a jeweled headdress and balances an amphora on her shoulder, which lets her show off the jewelry on her wrists. In the second one, she is a modern woman: her head is uncovered, and she wears a white blouse and black skirt. You can tell from the portraits that she wasn’t used to being looked at. She doesn’t confront the camera. Madani would tell his customers that he always focused his lens right into the eyes, right on the pupil. Did she shy away from this? She wasn’t sure where to put her hand. Madani must have told her to keep one arm akimbo, to show off her shoulders. Her expression is unreadable: it might be defiance, and it might be resignation.

When Baqari found out what his wife had done, he immediately went to the studio and demanded that Madani destroy the negatives. Madani refused, but he did agree to scratch across them with a pin instead. Years later, Baqari came back to the studio. By then, his wife had committed suicide, burning herself to death in order to escape him. He asked Madani to make prints from the scratched negatives; he wanted to know if there were any other negatives he didn’t know about. It didn’t matter if they were damaged. He just wanted to look at her again.

Hashem El Madani’s father, who came to Lebanon from Medina in Saudi Arabia, was once asked if photography was haram, or forbidden. He answered that it wasn’t; a photograph is just the same as a reflection of one’s face when one looks into a pond.